Another day of loneliness, I decided to visit my friends in Pasir Ris.  It has been three months since we've met and to think of it, Singapore is just a small country.  Pasir Ris is located at the far West of Singapore and     traveling from the East takes an estimate of 1 hour by MRT.
Pasir Ris MRT Station (EW1)
I have reached the Pasir Ris MRT Station and went down to the ground floor.  After tapping out from the station, I turned left to the Exit A and pass through the White Sands Mall. 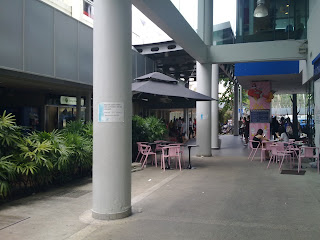 How to get to the Pasir Ris Town Park?
I walked through the other corner of the mall and saw the Pasir Ris Central street, which has a traffic light.  After I crossed to the other side, I can now see the Fishing Pond at the center of the Pasir Ris Town Park.
Fishing is my long time hobby, so I inquired at the counter. I was surprised to know that I need to pay S$25 (P825) for a one-hour fishing. So, I decided to proceed to the food court where my friends are waiting for me and thought that I just go fishing by the beach, where it's FREE!
See the view of the Fishing Pond... 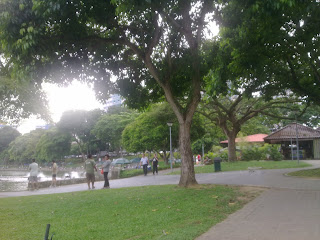 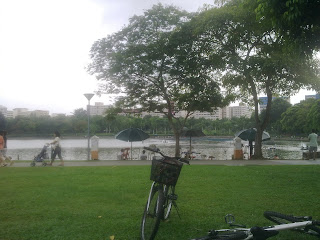